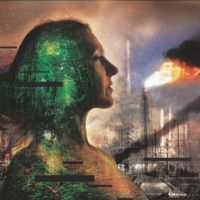 “Kubat has a rippling voice, a ringing guitar style, melodies that linger, and lyrics that echo” — Performing Songwriter Magazine

Audra Kubat is a Detroit born singer-songwriter. Self-taught, Kubat began composing music on the piano at the age of eight. In her teens she started putting words to the music. Teaching herself to play the guitar, she began performing in local coffeehouses. In 1999 she created the band, “Stunning Amazon”, and in November of that year released a self-titled album. The band became locally successful and the CD paved the way towards bigger shows and media appearances.